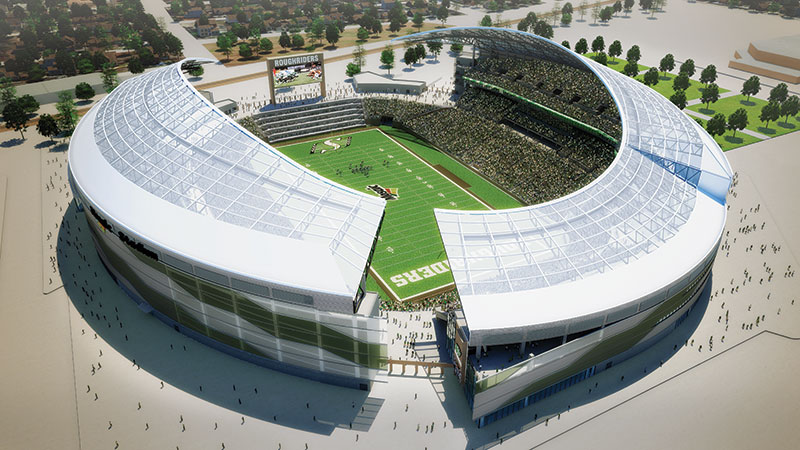 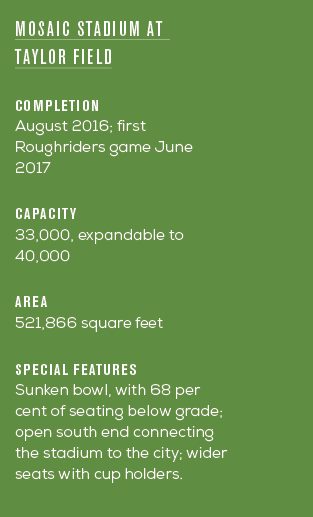 There’s a new stadium going up in the City of Regina that Mayor Michael Fougere says will be an “iconic gathering place” for the city for years to come.
But less partisan observers in Saskatchewan’s provincial capital are watching closely to see just how much the community-owned facility will benefit the entire city, and not just its primary tenant, the Canadian Football League’s popular Saskatchewan Roughriders.
The new $278-million Mosaic Stadium will be used by minor football and soccer groups for at least 800 hours a year, says Fougere, equalling the community time provided by its 106-year-old predecessor, which is also named Mosaic Stadium. “It’s going to be a focal point for youth,” Fougere adds.
The design also includes a general admission lounge with a capacity for 500 people, plus 38 corporate suites.
The open-air stadium is the jewel in the crown of the ambitious Regina Revitalization Initiative, which will see the complete redevelopment of downtown’s Taylor Field, the site of the current Mosaic Stadium, as well as a 17.5-acre rail yard. Dubbed Mosaic Stadium at Taylor Field, the new facility is part of Evraz Place, one of Canada’s largest event complexes with 1.2-million sq.ft. of indoor space, and an outdoor tradeshow area covering almost 42 acres. The Evraz Place grounds also include the Brandt Centre (home arena for the Western Hockey League’s Regina Pats), the Queensbury Convention Centre, and the Co-operators Centre, a six-rink ice sports facility that hosts local, regional and national competitions year-round.
Cory Kulczycki, an assistant professor at the University of Regina with research interests in recreation, leisure and sport tourism, says the city is following the recent trend of situating new stadiums close to other major sports and event facilities. He says the synergy will help Regina draw a “diverse suite” of sports tourism events. “There’s a definite connection,” he notes, “and a way to use these facilities as one unit.”
Kulczycki says the city already has a strong track record of attracting large sports tourism events like the 101st Grey Cup in 2013 at the old Mosaic Stadium, the 2014 North American Indigenous Games and the 2010 World Junior Hockey Championships.
With an attractive new stadium more than twice the size of the old one, Fougere says the city will be aggressive in its efforts to attract regional, national and international sport events. “We’ll market this hard because it’s a brand new facility,” he adds. “There will be nowhere else like this in Canada.” 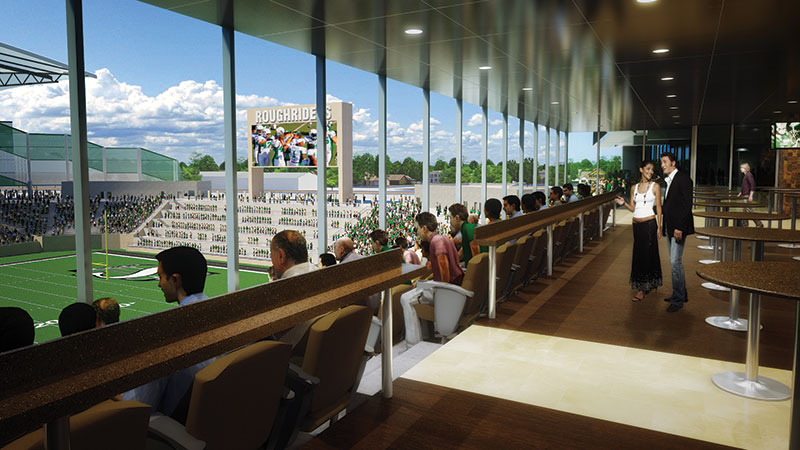