Too often, words like these filter out from locker rooms across the country. We want our organizations to be safe and respectful spaces for young athletes and fans alike. But insiders say homophobia still lingers in sports today.

“I think most of this language is habitual rather than hateful,” long-time NHL executive Brian Burke said in a Calgary Sun interview. “It’s still harmful, it still hurts people’s feelings, it’s still got to stop, and it can be done.”

Burke has more than a passing interest here. His son, Brendan, made headlines in 2009 when he came out as gay and then, only a few months later, died tragically in a car accident. In 2012, to honour Brendan, his brother Patrick Burke co-founded the You Can Play Project to advocate for inclusion in sport.

Today, You Can Play is known for its uniquely positive and educational approach, working at multiple levels and via big-name partnerships including the CFL, Canadian Olympic Committee and the NHL. “It saves lives,” says Jillian Svensson, You Can Play’s vice-president of development and operations, adding that today, “the timing couldn’t be more important. We’re all seeing what’s happening with the increase of such hatred and intolerance in the world.”

Recently, the organization announced important hockey “firsts.” To begin, Svensson says the NHL has reached 100 per cent participation in the You Can Play initiative. “It’s the first time we have full support from the NHL, the NHLPA and all 30 clubs… Every single club is going to have a designated You Can Play ambassador.”

For players and teams wanting to wrap their sticks with the tape and support the cause—all sales support LGBTQ youth outreach initiatives—rolls are available for purchase at pridetape.com. “You’re going to see a ton of it,” says Svensson, adding Pride Tape will be featured at NHL games, special You Can Play events and PSAs. 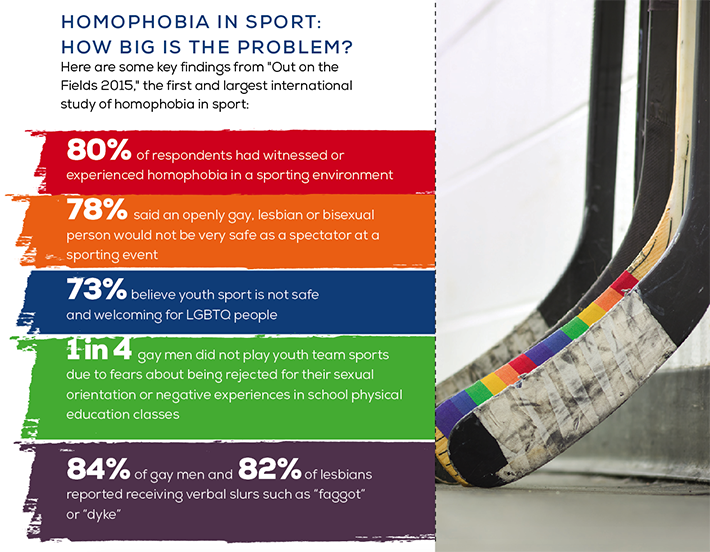 Simple yes, but such measures are really meaningful, says Chris Mosier, vice-president of program development and community relations at You Can Play: “People are seeing their heroes support LGBTQ rights and inclusion in sport.”

And what of organizational culture? What’s the best way to address and transform hearts and minds and create safe spaces? The key, Svensson says, is a multi-tiered approach. “With our CFL partnership, we train every single team in the CFL, we’re in the locker room; we’re with the players only. Then we go to the coaches, then we do a presentation to every front office of all nine teams. We have our resource in front of every player when they come in through training camp.”

She says effects can be profound. “It’s really incredible to hear the players come up to us after training and say, ‘you know, my uncle just came out and I’ve been having a hard time with this… You really helped me understand it more.’”

Coaches are engaged as well. “Coaches have said, for example, what if I have a player who says, ‘My religion says that this is wrong?’”

Rather than a right versus wrong approach, Svensson advocates finding middle ground: “Does your religion promote love and respect and kindness? Most likely it does, and so whether you agree or disagree based on religion, what we’re asking you to do is treat people with kindness and respect.”

0 replies on “You Can Play”