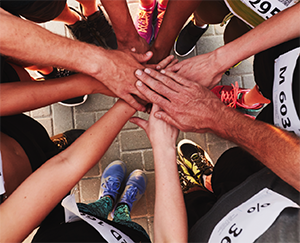 In its 2016 season, Water Polo Canada’s National Championship League (NCL) brought together 63 clubs for 750 games across Canada. And for the finals in Montreal last May, every team member who wanted to participate had to stay at the Courtyard Marriott Montreal Airport.

“It’s a win-win situation,” Goulet says. “At the end of the day, everybody sees that it’s been a plus for the sport, and it’s a plus for the people we are dealing with.”

Over the past two years, the national association made exclusivity deals with a variety of hotels for NCL regular season games, its 2015 AGM, and a national leadership conference.

Under its previous policy, local water polo clubs organizing an event sometimes signed agreements making a specific hotel the official lodging provider. But teams were under no obligation to stay there and, at times, the hotels could not fill all of the rooms set aside. “There was no way to have control,” Goulet explains.

Stay to play, also known as stay and play, provides more control. But implementing it didn’t come easily. Some teams didn’t like losing the freedom to choose their own hotel, and were afraid they’d end up paying more.

But 95 per cent of the time, notes Goulet, team members save 25 to 30 per cent off the regular room rate. As part of the agreement, the hotel returns about 10 per cent of the room fee to Water Polo Canada. That’s been channelled into a $30,000 development fund, which enabled the association to provide $2,000 grants this year for special projects to 15 teams. 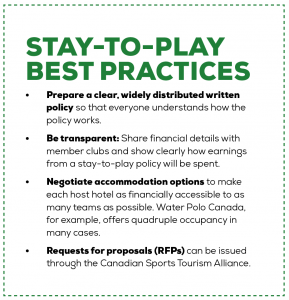 THE PLACE TO BE

Jessica Kotsopoulos, Starwood Hotels & Resorts’ group sales manager for the metro Toronto market, says stay-to-play policies are popular with U.S. sports organizations, but have been slow to catch on in Canada. She knows of only a handful of associations that have adopted it, including Water Polo Canada, Volleyball Canada and Taekwondo Canada.

Kotsopoulos says it adds a special air of excitement around an event. Concentrating participants in one location also makes it easier for organizers to offer services such as shuttle buses to athletic venues. “If everyone’s in the same hotel, you’re creating an atmosphere of ‘this is the place to be,’” she observes. “Participants feel they’re part of an event. It just makes for a feeling of unity.”

0 replies on “The Case for Stay-to-Play”