Have you ever been to a Winnipeg Jets home game and witnessed the True North Shout-Out? Ever since the Jets returned to the city in 2011, fans have raised the roof by shouting “True North!” during the “true north strong and free” part of Canada’s national anthem. It’s a new tradition and a grassroots tribute to the founders of True North Sports & Entertainment (TNSE), which brought NHL hockey back to Winnipeg.

Winnipeg is on a roll. It’s making huge investments in its convention, sports and accommodations infrastructure, and not only do its community sports facilities practically run 24/7, the city is renowned for hosting national and international sport events, including the FIFA Women’s World Cup (2015), the Grey Cup (2015), and the Pan Am Games (1999 and 1967). Next up: the 2017 Canada Summer Games.

For Winnipeg, the principal capital legacy of the 2017 Games is the $43-million Canada Games Sport for Life Centre, home to Sport Manitoba and more than 60 provincial sport organizations, the Sport Medicine Centre, the Manitoba Sports Hall of Fame and Museum and the Paul Robson Resource Centre for Leadership and Coaching. Construction of the adjoining Qualico Training Centre will be completed in time to host the Games’ basketball and volleyball competitions. The complex is, essentially, a one-stop administrative, resource and training facility for amateur sports and the first of its kind in Canada, says Greg Guenther, senior manager of sport development for Sport Manitoba. 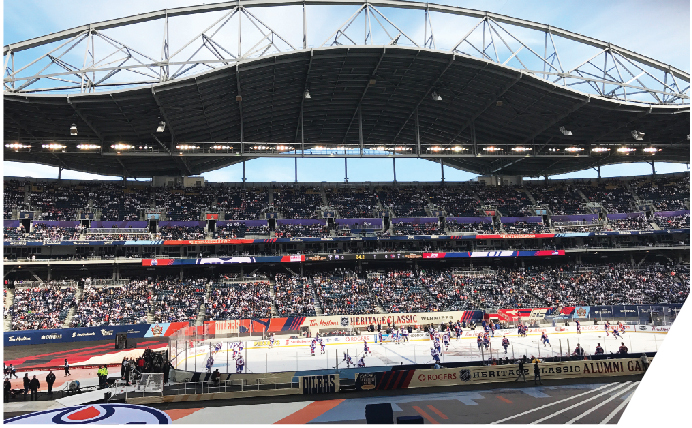 When Winnipeg hosted the 2016 NHL Heritage Classic weekend last October, it transformed Investors Group Field into an outdoor hockey rink. Day one saw hockey greats such as Wayne Gretzky and Mark Messier take to the ice for the Alumni Game, while the highlight of day two was a match between the Winnipeg Jets and the Edmonton Oilers.

Investors Group Field opened in 2013 and was designed to enhance the fan experience, says Wade Miller, president and CEO, Winnipeg Football Club. The concourse level provides clear views of the playing field, and the stadium features a number of interior areas where fans can meet and mingle, as well as an exterior tailgate zone that accommodates as many as 6,000 people. “It’s really about building the stadium for a new generation… and making it about a whole day experience rather than just a football game,” Miller says.

Home to the Winnipeg Jets and the Manitoba Moose, the MTS Centre is situated in the heart of downtown and is an anchor to True North Square, a new $400-million sports, hospitality and entertainment district currently under construction. The site will feature an outdoor plaza that will host pre-game events, ice skating, festivals and concerts.

The MTS Iceplex is the official training and practice facility for the Winnipeg Jets and Manitoba Moose. It also hosts youth and adult hockey as well as curling, roller hockey and ball hockey, according to general manager Monte Miller. The facility boasts four rinks, a special circular ice pad for goalie training, workout facilities, meeting and administrative space and a restaurant.

The John Blumberg Softball Complex received a cash injection of $200,000 to prepare the seven-diamond facility for the 2017 Canada Summer Games, where men’s and women’s softball competitions will take place, says Marshall Shuster, director of operations. Improvements include renovations to the central pavilion, new bleachers, and a new underground irrigation system.