When Toronto won the bid to host the Pan Am/Parapan Am Games, a big idea began to percolate: Let’s make Toronto 2015 the most inclusive international multi-sport games in history.
A precedent had been set in 2010 when the Vancouver Winter Olympics established the very first Pride House. Since then, Pride House pavilions have popped up at a number of international competitions, including the London 2012 Olympics and the Glasgow 2014 Commonwealth Games.
And then there was Sochi. Toronto’s Pride House (PrideHouseTO) strategy was already years in the planning when Russia refused to allow a Pride House pavilion at the 2014 Winter Olympics. The controversy shone an international spotlight on the issue of inclusion. By the time the Pan Am Games kicked off last July, “we wanted to send a message loudly and clearly,” says Catherine Meade, who served as co-chair of the PrideHouseTO leadership team. “We wanted people to see what it looks like when we are accepting and valuing one another.”
Meade, along with Matthew Cutler, previously director of strategic partnerships for The 519, a Church Street community centre, and project director during the Games, share some of the key takeaways of the PrideHouseTO experience. 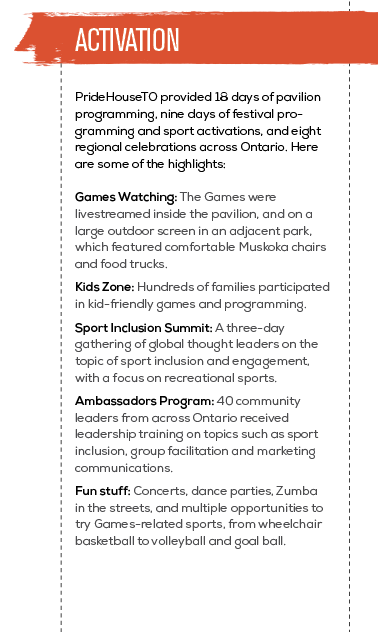 There was much discussion as to whether PrideHouseTO should locate its pavilion within one of the designated Games spaces, such as the Athletes Village, or within the city’s established LGBTQ community. In the end, the pavilion was located at The 519. “We decided that our primary celebration space needed to be a place where athletes, the Games family, and the broader LGBTQ community could access it,” Cutler explains.

The 519 provided education and training on the topic of inclusion to dozens of Pan Am executives, managers and volunteers. “We really wanted to bring a broader awareness of the concepts of inclusion. When you practice inclusion intentionally, it advances inclusion not only for one specific group, but for everyone—from
people using mobility devices through to gender, sexual orientation, faith and family makeup,” Cutler says.

Hail to the Champions

From day one, PrideHouseTO had the support of the Toronto 2015 organizing committee. That stamp of approval was critical when it came time for PrideHouseTO to approach the corporate community for funding and sponsorships, Meade says.
CIBC became the first major corporate sponsor of a Pride House at an international sporting competition. The partnership helped to open doors and sent the message that PrideHouseTO was a serious project and a serious activation, Cutler says. The sponsorship funding enabled PrideHouseTO to hire staff, offer diverse programming, and to raise the level of event production and hosting.