Why are a growing number of Canadian destinations creating fan zones where people congregate, party and even watch the game on a big screen… for free?
These sports-related viewing parties are common in Europe, but Canada is catching on. Thousands gathered in public spaces in Vancouver and Whistler during the 2010 Winter Olympics, just to be part of the excitement. And last summer, Vancouverites flocked to Larwill Park during the FIFA
Women’s World Cup where the City of Vancouver invested $1.2 million into the free-access site, with its video screens, beer garden, bands, food trucks and sponsor activations. Other recent examples:

• PrideHouse Toronto hosted an LGBTQ-positive fan space during the 2015 Pan Am/Parapan Am Games where competitions were livestreamed inside the pavilion, and on a large outdoor screen in an adjacent park.

Ringed by giant screens, Air Canada Centre’s outdoor Ford Fan Zone is pre-game central for Toronto Maple Leafs and Raptors fans. “It’s a very significant investment,” says David Freeman, head of brand marketing for Maple Leaf Sports & Entertainment, referring to the cost of providing police, medical and security services. But it’s worth it: “If we can engage the next generation of Leafs and Raptors fans, that financial investment will come back five, 10, 15 years down the road,” Freeman says.
Then there’s the publicity value. When Air Canada Centre first set up the public square during the spring 2014 playoffs, TNT (the U.S. network that broadcasts the games), would lead the broadcast with footage of fans in the square, which the fans dubbed “Jurassic Park.”
“It really painted Toronto as this crazy, basketball-mad town,” Freeman says. “It’s literally part of the brand now; it’s who we are.” 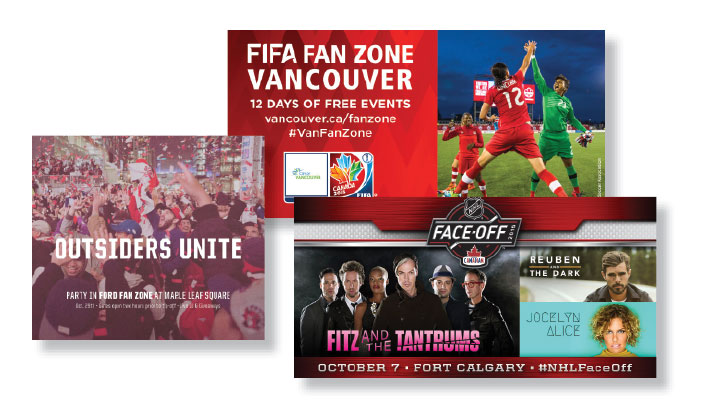 0 replies on “Enter the Fan Zone”