Tennis legend Billie Jean King is an influential and outspoken advocate for athlete rights and a pioneer of gender equality in sport. King was the main attraction during Tennis Canada’s inaugural UNMATCHED: Gender Equity in Sports Conference in Toronto last month. In case you missed it, here are some of the key insights King shared during the event.

King’s dream for Canada: If you ask me my dream for Canada, for women’s sports, it would be for the top women in professional hockey to have a league. We’ve had the NHL for over 100 years. I know there is a women’s hockey league, the Premier Hockey Federation, which is fantastic, but we need a league where the very very top players are also playing.

On the Original 9 (Women’s professional tennis launched in 1970 when nine players, including King, signed $1 contracts to compete in a new women’s tour, the Virginia Slims Series): That is the one, most important, moment in the history of women’s tennis.  [We didn’t do it] just for the nine of us… We were willing to put our careers on the line because we were told we would be suspended. We were willing to give up our careers in our sport so that any girl, if she’s good enough, would have a place to compete… and to be able to make a living playing tennis. Anytime a woman gets a cheque [for playing professional tennis], it’s because of that day in 1970.

On diversity and inclusion: I had an epiphany when I was 12 years old. At the Los Angeles Tennis Club, everybody in our sport was white, wore white clothes and played with white balls. I asked myself, ‘where’s everybody else?’ That was the moment I said ‘I’m going to fight for equality for the rest of my life.’ I didn’t know the word ‘platform’ then, but that’s what I was visualizing. I made that promise when I was 12 and I still feel, probably more strongly about it today, than even then.

On money and power: Money equals power and girls need to follow the money. We’re taught not to. We’re taught to be happy with the crumbs. Do not be happy with the crumbs! You want the cake, the icing and the cherry on top. Don’t underestimate yourself. Think big, think tall. And please learn about money. Go and work [sport] events, but learn the money part of the events, not just the operational part.

On investing in women’s sports: We’re getting near to a tipping point. Psychologically, I think people are starting to think about us and believe in us. But we’re good business. Let’s look at ticket holders. Every time I’ve gone to an NHL or NBA game, I look into the stands and it looks pretty 50/50 to me. What if women decided not to buy any more tickets to baseball games, NBA games, NHL games, and we’re not going to spend any money on merch. What if we all said that we’re not doing this anymore until you start investing in women’s sports properly and get us going. 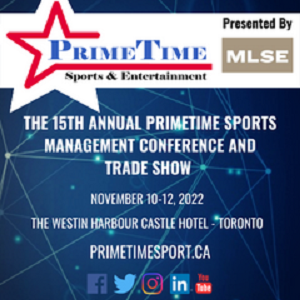