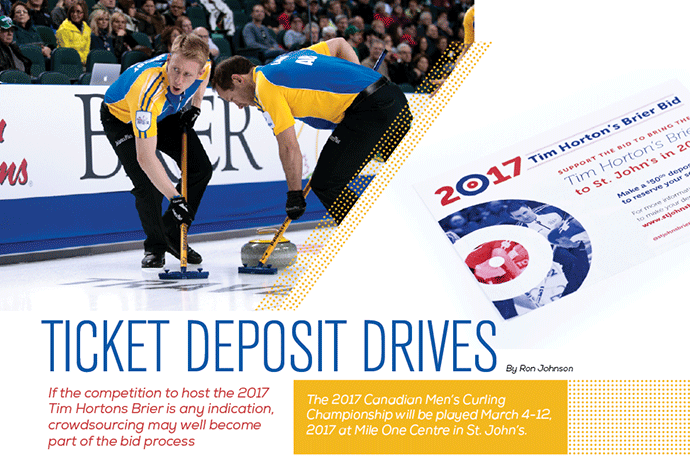 If the competition to host the 2017 Tim Hortons Brier is any indication, crowdsourcing may well become part of the bid process

Crowdsourcing is defined as a “process of obtaining needed services, ideas, or content by soliciting contributions from a large group of people, and especially from an online community.” Crowdsourcing is evolving; it’s redefining how people do business, including those in the business of planning major sporting events.
The Tim Hortons Brier is one of the biggest curling events in Canada, and the competition among cities to host this event is as intense as the game itself.
One of the essential elements of a successful bid is demonstrable community interest, according to Curling Canada spokesperson Al Cameron. “If a community can come to us and show a building is 40 or 50 per cent sold two years in advance, that’s a strong message,” he explains.
Regina, Sask., St. John’s, Nfld., and Sault Ste. Marie, Ont., submitted bids to host the 2017 Brier, but the latter two borrowed a page from crowdsourcing by pre-marketing and pre-selling ticket deposits in hopes that a successful drive would put their bids over the top.
Both cities launched impressive efforts, but Curling Canada ultimately picked St. John’s to host the 2017 event.

St. John’s was the first to take the ticket drive plunge: “We decided to take the campaign on to show [Curling Canada] that we could not only sell seats, but also have the community embrace the event,” says Eugene Trickett, chair of the St. John’s bid.
Once St. John’s initiated their campaign, Sault Ste. Marie adopted the strategy. “We knew St. John’s was already doing it and they had a larger population, so we felt we had to,” says John Pucci, manager of sport tourism and event management for Tourism Sault Ste. Marie.
Through social media campaigns, including videos with star curlers, the bid committees of both cities solicited $50 deposits. If successful, the money would go towards a ticket purchase; if not, it would be refunded.
The campaigns utilized traditional social media such as Twitter and Facebook, which not only raised funds, but also helped create excitement for the event.

The ticket drives picked up celebrity endorsements along the way. According to Trickett, when Bob Cole, of Hockey Night in Canada fame, endorsed the St. John’s bid, it resulted in their second highest sales day. “Bob Cole’s voice is sacred in Newfoundland,” Trickett explains.

St. John’s achieved 2,187 deposits, says Trickett, far exceeding its goal of 1,500. Sault Ste. Marie also exceeded its initial target of 1,000 deposits.
Of course, it takes more than just a successful ticket deposit drive to win a hosting bid, but it appears as though the crowdsourcing strategy has impressed Curling Canada.
“I’m struggling to find a down side,” says Cameron. “Ticket [deposits] alone do not determine the success of a bid, but I’ll tell you what, it’s very significant to show that you can put bums in seats.”