Competitive Highland dancing blends artistic expression, cultural tradition and physical rigour—it’s been likened to sprinting on your toes while wearing 10 pounds of heavy wool clothing. Yet in Canada, while organizers fervently position it as a sport (as it’s deemed in Scotland), Highland dance competitions continue to battle a lack of official recognition by many provincial and sport bodies.

ScotDance Canada has hosted annual competitions since 1974 with increasing success. Barb Yorke, event manager for ScotDance Canada Championship Series 2017 (SDCCS)—held for the first time in Charlottetown, PEI—believes Canada’s event is now the largest. “We have more competitors than the world championships,” she says. 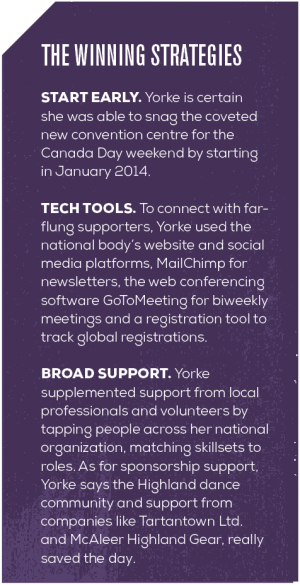 Why the solid leap? First, Yorke says, the competition landed on the July 1st Canada Day weekend. “That was really exciting,” she says, adding the 2017 Canadian champions were crowned on Canada’s 150th birthday. She also notes that uptake in PEI tends to be higher because of tourism appeal.

Wayne Long, events development officer with the city of Charlottetown, says the youth-oriented event brought an estimated $2.5 million in local spending by 2,000 participants, family members and spectators. Yorke adds that SDCCS, held at the new Prince Edward Island Convention Centre and adjoining Delta Hotels Prince Edward, accounted for 1,000 hotel room nights and produced a nice ripple effect island-wide. “People stayed on and made a full family vacation of it.”

While the event gratefully received municipal and provincial funding (including from the city of Charlottetown and its sport tourism brand, SCORE!), smaller communities tend to have less access to corporate and public dollars compared to much larger destinations, Long explains. “We started out with $1,000 in the bank for a $340,000 budget,” Yorke adds. The lack of official sport status didn’t help. “When you apply for arts and culture grants, they don’t fund competition. When you go to sport funding organizations, they don’t necessarily recognize us,” says Yorke.