In what Supovitz likens to a parting of the seas, the city of New Orleans agr eed to alter the dates of its iconic Mardi Gras celebrations so that it could host Super Bowl XLVII on February 3, 2013, smack in the middle of Carnival season.

What advice do you have for negotiating so-called non-negotiables?
Well, it really is a question of how hungry a city is, and how much an event will help them drive revenue or exposure, or provide solutions to whatever societal or political issues they have. There’s really no risk in asking or exploring things that might make your event better or bigger, or that just haven’t been done in that city before. The reason Super Bowl XLVII worked so well was because the city had the opportunity to drive people into New Orleans and the French Quarter for three consecutive weekends instead of just the usual two weekends during Mardi Gras. That’s a win and a great tourism development tool.

How can cities gain an edge when bidding to host an event?
Be aware of the history of that event—where it’s been held and what kinds of things were done before. If your pitch uses the same themes and the same types of venues used before, you may be competing on the basis of what you think [the event organizer] wants to hear… when they actually want to re-energize the event in some way. I remember one year, when Calgary proposed hosting the NHL Draft, all of the Calgary Flames executives came out to host a pancake breakfast and meet and greet fans. It really added an element of hospitality that is very much identified with that community. It was just a detail… but that detail was really important.

The Super Bowl XLVIII NFL Experience had been planned as an indoor event at the Jacob Javits Center. Due to unforseen circumstances, the event had to be relocated, so Supovitz turned a 10-block stretch of Broadway into Super Bowl Boulevard. Running right through Times Square, the four-day event featured an eight-lane toboggan run, and saw the 4th floor of Macy’s Herald Square store turned into a warming station for fans.

“We realized that… if you’re embracing the cold for the game, why not embrace the cold for the fan event? Super Bowl Boulevard turned out to be an enormously successful event, with 1.5 million people on the street during the four days.”

During Super Bowl XLVII, a mechanical failure threw half of the Mercedes-Benz Superdome into darkness for 34 minutes. Only 10 days prior, Supovitz and his team had gone through an intensive tabletop rehearsal that prepared them to manage unexpected crises.

What was going through your mind during those 34 minutes? What advice do you have for event managers when faced with an unfolding crisis?
For the Super Bowl, there is a special control centre for the people who are responsible for everything from security and police, to fire, football operations and officiating. We knew, within a minute or two, that it was a power failure and not a terrorist incident. What we didn’t know right away was whether we would be able to restore the power.

What was uppermost in my mind was getting the power back on and telling the fans what was going on, to stay in their seats, that there were no emergencies and that we were working to restore the power. Luckily, the public address system was on a separate generator. The second thing was to get the word out through social media, which we were able to do from our control booth, to let people know everything was going to be okay.

We could have turned the lights back on after 24 minutes, but the reason I decided not to resume the game [for another 10 minutes] is that I wanted to be sure that all the other systems were up and running so that there wouldn’t be a problem later. For example, if the instant replay system had not been back online and there had been a controversial play, the situation would have been a competitive controversy.

It’s important that a crisis management protocol and a sense of teamwork is established. My advice is to rehearse any system or logistical situation you might be facing. Work through what a problem would look like and how you would respond. Because an event manager is so busy, I would also recommend hiring a risk management consultant whose only responsibility is to look at everything with safety in mind. 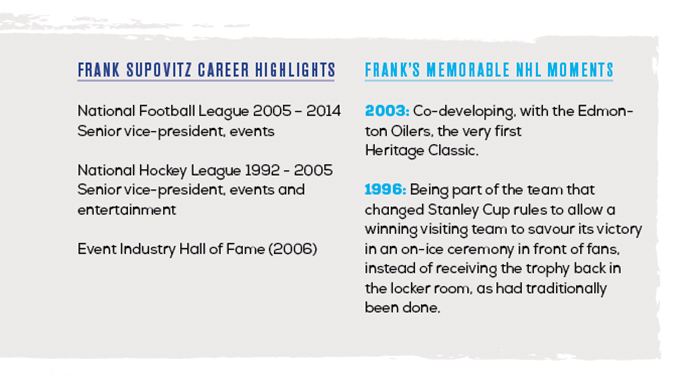