NHL arenas will be dark for the foreseeable future.

And when teams can return to the ice is really anyone’s guess in the wake of commissioner Gary Bettman’s announcement Thursday that the 2019-20 season has been suspended indefinitely due to the COVID-19 pandemic.

The move to “pause” the schedule comes after the NBA took the same measure Wednesday night following the revelation a member of the Utah Jazz had tested positive for the novel coronavirus.

“The NHL has been attempting to follow the mandates of health experts and local authorities, while preparing for any possible developments without taking premature or unnecessary measures,” Bettman said in a statement following a conference call with the board of governors. “However, following news that an NBA player has tested positive for coronavirus — and given that our leagues share so many facilities and locker-rooms and it now seems likely that some member of the NHL community would test positive at some point — it is no longer appropriate to try to continue to play games at this time.”

The NHL advised all its clubs earlier in the day not to conduct morning skates, practices or team meetings amid efforts to contain the outbreak.

The Columbus Blue Jackets and San Jose Sharks said Wednesday they would play upcoming home dates behind closed doors and without fans after state and local officials instituted bans on large gatherings of people, but there was no league-wide mandate.

There are 189 games — including 10 that were slated for Thursday — left on the NHL’s regular-season calendar.

It’s unclear what the hiatus means for those contests or the playoffs, which are scheduled to begin April 8.

“We will continue to monitor all the appropriate medical advice, and we will encourage our players and other members of the NHL community to take all reasonable precautions — including by self-quarantine, where appropriate,” Bettman continued. “Our goal is to resume play as soon as it is appropriate and prudent, so that we will be able to complete the season and award the Stanley Cup.

“Until then, we thank NHL fans for your patience and hope you stay healthy.”

If the NHL is eventually forced to go a drastic step further and cancel the season and playoffs, it would mark the third time since 1893 the Stanley Cup hasn’t been awarded.

The Spanish flu forced the cancellation of the 1919 Cup final, while the entire 2004-05 campaign was lost to a lockout.

Another work stoppage shortened the 2012-13 season to 48 games, plus the playoffs.

“The decision to temporarily suspend play due to the COVID-19 pandemic is an appropriate course of action at this time,” the union said in a statement. “The NHLPA will continue to closely monitor this very dynamic situation and remain in daily discussions with the league, our medical consultants, and our players regarding all aspects of this matter.

“The players are looking forward to the opportunity to resume play in front of hockey fans everywhere.”

The NHL, NBA, Major League Baseball and Major League Soccer restricted access to locker-rooms earlier this week, including barring media, amid fears of spreading the virus.

Players and coaches instead spoke with reporters in adjacent media centres before and after games.

“I think we’ve got a great responsibility,” he said. “We’re privileged to be in the positions that we are when you’re talking about professional athletes. To whom much is given, much is expected.

“As much as we get caught in the mundane of our day of playoffs and the rest of it, there is defining moments where that just stops and you know there is a bigger cause, a bigger priority, where true leadership is required. That’s part of today, is giving that message out. What we do we think means a lot, but there’s other things more important. This is much more important.”

Teams across the NHL released statements later Thursday in support of the decision to put the league on ice, including one from Toronto Maple Leafs president Brendan Shanahan.

“The health and safety of our fans, players, staff and media always remains at the forefront of our decision-making as a hockey club and league,” Shanahan said. “Like you, we have many questions about what’s to come in the future … our thanks to our fans for their support and understanding as we continue to navigate this very fluid situation.”

“Public health and safety are a priority at a time like this,” Edmonton Oilers captain Connor McDavid said in a statement released by the club. “As players, we support the NHL and NHLPA’s decision to suspend the season for the safety of the teams and their fans.

“We look forward to the day we can get back playing the game we love in front of full arenas.”

Sports leagues and tours around the world have either cancelled or postponed games and events as the coronavirus spreads.

The second-tier American Hockey League, the junior-aged Canadian Hockey League — including its Western, Ontario and Quebec regional circuits — MLS and MLB also suspended their seasons Thursday, while the Swiss hockey league announced it has ended the schedule in the top two divisions before the playoffs. That decision comes less than two months before Switzerland is due to host the men’s world championship in Zurich and Lausanne.

“Without question, this is an unprecedented period of difficulty for the sports world,” Hockey Canada CEO Tom Renney and president/COO Scott Smith said in a joint statement. “The health and safety of all participants in sport, including players, coaches, staff, officials, fans, family, volunteers and the general public, is of the utmost importance to Hockey Canada.

“We recognize the tremendous effort that has been put forth all year by individuals across the country as they participate in Canada’s game. Although it is difficult to process the hockey season ending abruptly, we feel this is the best course of action in order to do our part in keeping our country safe.”

The women’s world championship, which was scheduled for Halifax and Truro, N.S., from March 31 to April 10, was cancelled by the International Ice Hockey Federation on Saturday.

Most people diagnosed with COVID-19 experience mild or moderate symptoms, such as fever and cough, and the vast majority of those who contract the virus recover. According to the Public Health Agency of Canada, the risk to the general population is low.

But for some, including those 65 years of age and over, those with compromised immune systems or pre-existing conditions, the illness can be much more severe. Among the Canadians diagnosed with the illness, so far fewer than 15 per cent have required hospitalization.

The situation has changed drastically in North America in recent days.

“We’re aware of what’s happening in other places in the world and we understand that things may evolve or change,” Bettman said on March 4. “We also understand that we’re going to have to react to it in a professional and timely and sensible basis.

“But I don’t think as we sit here today, people should get too far ahead of themselves.”

— With files from Donna Spencer in Calgary.

This report by The Canadian Press was first published March 12, 2020. 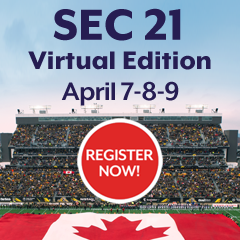