Who doesn’t remember where they were when Sidney Crosby scored the Gold medal-winning goal during the 2010 Vancouver Winter Olympics? Or when Christine Sinclair led the Canadian women’s soccer team to their sublime run during the 2012 London Summer Olympics. According to Minister of State for Sport, Bal Gosal, sports can unite a country like nothing else. And 2015 is a year unlike any other for amateur sport in Canada. So astounding is the array of international competitions that Ottawa has declared 2015 the Year of Sport. 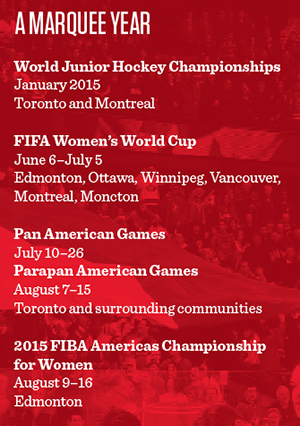 “It seems like every kid I talked to after the Winter Olympics wanted to be Sidney Crosby,” says Gosal, of the impact hosting international competitions can have on children. “I truly believe that if we host any kind of games or sporting events, when these athletes compete at home their confidence is up, people watch and they want to get involved in sports.”

Declaring 2015 as Canada’s Year of Sport is meant to be a celebration and a way to encourage youngsters to put down the electronic devices and slow the decline in sports participation and physical activity. The federal government plans to encourage Canadians to celebrate sport throughout the year.

It’s also an opportunity for the sport tourism industry to take a bow and to push even further to establish Canada as the top destination for international sporting events on the planet.

“Sport, as we saw in Vancouver in 2010, unites communities, creates healthy communities, and gets the younger generation involved in sports and physical education,” says Gosal. “Sport is something everyone loves to come and watch. It’s the biggest unifying factor in the world.”

The marquee amateur sporting events happening in Canada in 2015 include the gigantic Pan Am/Parapan American Games in Toronto and surrounding communities, the FIFA Women’s World Cup, and the 2015 World Junior Hockey Championships. But there are hundreds of international, national, provincial and local competitions happening from coast-to-coast-to-coast. And it is only increasing.

“Typically we are in the 40 to 50 international events per year range,” says Rick Traer, CEO, Canadian Sport Tourism Alliance. “We do have a rather robust international hosting program through Minister Gosal, through Sport Canada, which has really provided the opportunity to host and financially support more international sport events across the country.”

In 2014, Canada ranked number two in the Global Sports Nations Index behind Russia, which achieved the top spot largely due to hosting the most recent Winter Olympics. Already a $5.2-billion industry, the sport tourism sector has a unique opportunity to push into uncharted territory by taking advantage of this call to arms that the Year of Sport presents. 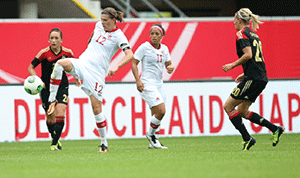 “It raises the level of awareness big time to have the federal government, the minister of state for sport and Governor General [David] Johnston identify 2015 as the Year of Sport,” says Traer. “It gives us a tremendous amount of play from a media standpoint and a much higher level of awareness of sport and how it’s a significant contributing factor to the development of healthy Canadians.”

“As the fastest-growing segment of the tourism industry, sport tourism accounts for over $5.2-billion in annual spending.”

By far the biggest event in terms of sheer numbers of athletes and volunteers is the Pan Am/Parapan Am Games.

“It is certainly the biggest deal to ever hit the city [Toronto], no question,” says David Peterson, the former premier of Ontario who took over as the chair of the organizing committee in September 2013. “I think it’s going to ignite the place and fire everyone’s imagination.”

The Pan Am and Parapan Am Games will take place in dozens of different locations across the Greater Toronto Area and surrounding communities. The Games are actually three times the size of the recent Vancouver Winter Olympics in terms of the number of athletes participating in the multi-sport amateur competition.

Pan Am will create 25,000 jobs in addition to leaving an incredible legacy of facilities such as the recently opened $56-million cycling velodrome in Milton, Ont., that is the only facility of its kind in Canada, and the second that meets top international standards in the U.S. and Canada.

The showpiece facility of the Games is the CIBC Pan Am/Parapan Am Aquatics Centre and Field House. Its $205-million price tag represents the “largest investment ever in Canadian amateur sport history,” according to the Pan Am Games organization.

The Aquatics Centre will double the number of Olympic-sized pools in Toronto, and as the only facility to meet the latest international competition standards will undoubtedly continue to draw marquee events and provide economic benefits for the community. For example, the centre has already been tapped to host the 2016 Olympic and Paralympic Swimming Trials.

The FIFA Women’s World Cup 2015 will see matches held in Moncton, Montreal, Ottawa, Winnipeg, Edmonton and Vancouver. It’s huge. The 2015 competition and the FIFA U-20 Women’s World Cup Canada 2014 are projected to produce economic activity of more than $337 million nationally.

Hosting such major competitions leaves behind a lasting legacy in so many ways, from sports infrastructure to community volunteers to the development of the next generation of high-performance athletes. If all goes according to plan, the Year of Sport will make the impact even greater.